Excerpts from interview with Roy Sellstrom,
former Lance Corporal in the Royal Pioneer Corps, assigned to collect bodies during the 1991 Gulf war. 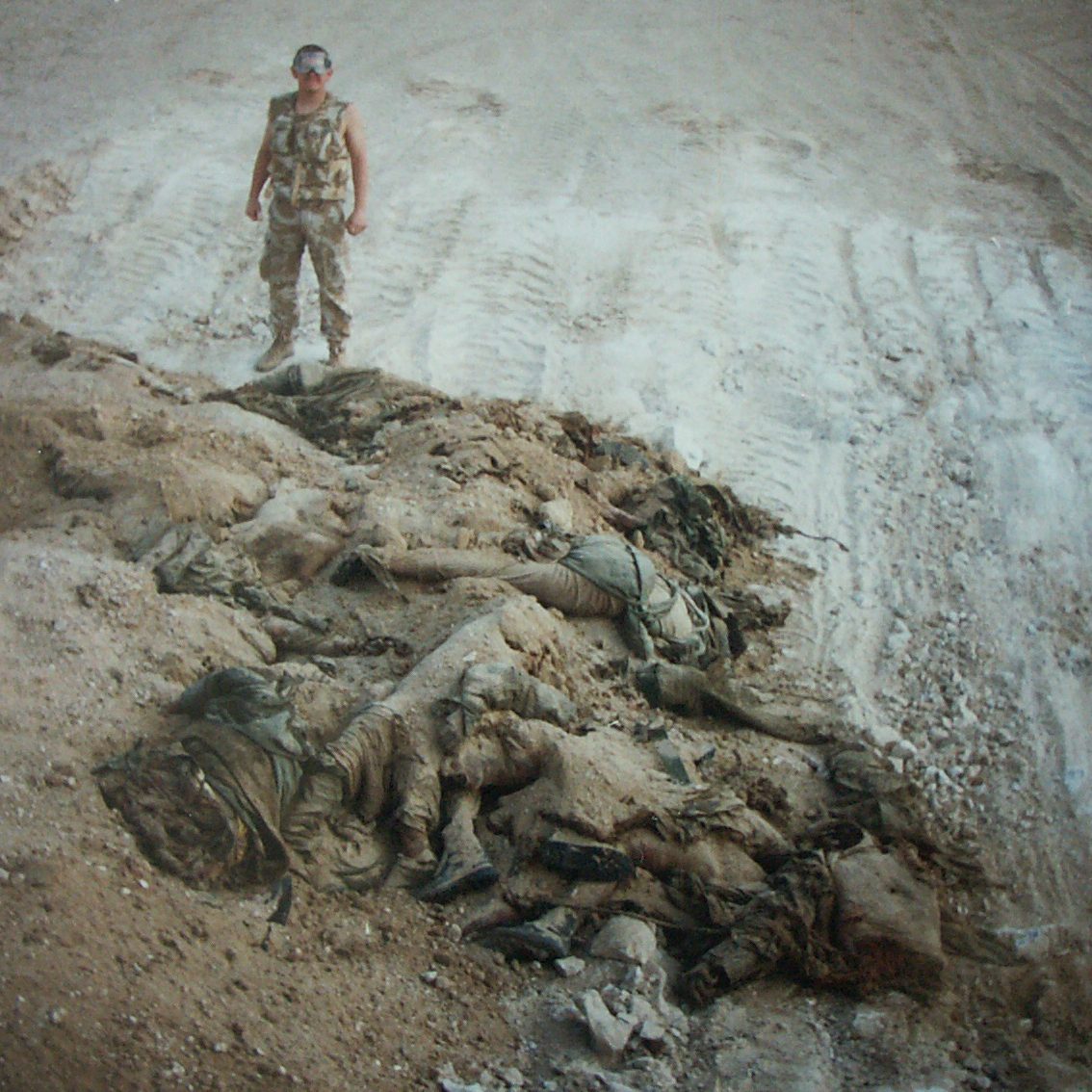 On joining the Army

When I was a young man at seventeen, if you asked me to spell something, I wouldn’t. I couldn’t even spell four letter words…I didn’t know I had dyslexia.

The Army recruitment centre called me an imbecile, (but) I had a couple of good references that got me into the regular Army. Probably ninety percent of young lads I met in training were like me. We were coming from shithole estates, abusive backgrounds, or just you know, people were poor and joined the armed military.

I knew at like seven or eight, I was going to be in the Army. My Grandad fought right through the Second World War. I had family members who were killed in the First World War. The Army ran through my blood, no problem at all.

I was in gangs when I was a kid (and) learnt at a young age how to use my fists. I think I was stabbed the first time when I was 16…that prepared me for a life in the military.

The first time I really hurt anyone I was going into the back of Bellevue with two friends and a load of teddy boys.

I had this piece of metal…this gang surrounded me, and said, “Give us that.” I went, “Here, fucking have it.”…his face just opened up in front of me, because I had caught him and (it) literally just burst out with blood. I ran for my life with this fucking howling mob chasing me…

I accept that I have trauma. I do accept (that) now. I mean, I was sexually abused when I was a kid.

I did a sleepover at a friend’s house and the dirty old bastard got a grip of us, and you know, he sexually abused me over the two days, you were cornered, and he was a predator…I wasn’t the only one who had been pimped out, to be honest.

I used to beat homosexual blokes up, no fucking problem at all. Ten a penny for them fuckers. I honestly thought paedophilia and homosexuals went hand in hand, and it doesn’t.

I was based in Cyprus in ’93, ’94, and we were watching all the TV pumped in from Britain. And we were watching I think it was like a Central programme on child abuse, and I turned round to my wife and said, “Deb, you do realise I was abused when I was a kid.” And I never told my brothers or my mam, because like you say, in the ‘70s no-one spoke about it…but to me the way I got over it was probably using my fists.

I’m not asking for forgiveness, but I’m not going to fucking apologise either. And I took that into the armed forces.

If you didn’t hit your mate, you were going to guarantee that your mate is going to fucking hit you. So it was dog eat dog in a sense. We did 22 weeks of infantry training…I put my hands on trainees. You know what I mean?

Just before we finished training, the NCO turned round and said “Give us your helmet. I need a shit.” And I went, “scuse me?” He squats down and has a shit in it, and then he says, “Put that back on.” …I ran off…the Platoon Sergeant (said) “Oh, come on, dry your eyes. Let’s go back.” So yes, you know, that was the mentality of training…pretty brutal.

I saw some violence inflicted on each other, you know what I mean? Because they would just go for each other like rabid dogs, because you were trained to do that. And like I say, if you couldn’t fight you probably got a kicking.

They sent me, Phil Gill and Chuggy down to Northampton morgue. We went into the scene of crimes and all we’re looking at is fucking boxes and boxes of murders, what had happened in Northamptonshire.

So you open a box and there’s a fucking hammer there, and then a load of photographs of some woman’s head caved in, and then you open the next box and it’s a rope, you know, a ligature of rope where some woman had committed suicide. You know, you’d go, “Fuck me twats, what’s in this one?” And we’re all giggling there, and then he says, “Right you can go to the morgue”…you walked up across the road and you were at – I think it was Northampton General Hospital.

We said, “look, we’re the army NCOs. We’ve been sent down.” I remember there was a bit of wit sent, because when we walked in the bloke was having his dinner. And I just thought, “Fuck me, how can you have your dinner when you’re working with dead bodies?”
I walked through, and the first thing that hit me was the smell…you just want to fucking vomit. And I looked and there were about eight fucking bodies on gurneys. There was a stack of bodies, and I’m thinking, “My fucking god, what the fuck have I let myself in for here?”

The fucking smell…if I had to identify it I would say it’s a mixture of meats, bodily fluids, you know, blood smells quite like iron, meat, dead rotted meat…you walked in, and the mortician was just hacking away at some fucking body – and he said, “Come over. Don’t be fucking frightened.” And he’s got a drill bit, and it’s got a fucking spinning blade at the front, and he’s literally cutting through some fucker’s head. And you’re fascinated but horrified at the same time.

All I wanted to do was run.

On deployment to Saudi Arabia

In Saudi, we drove down to Al Jubail docks. We were (in) camp four, which had two big refrigeration sheds and we allocated one of them for all the dead bodies. So we were looking at 200 dead bodies a day. There (were) only fucking 30-odd of us there.

My first body was a young officer…there had been a road traffic accident (and) his tank had rolled. Our job was to go out there and find the dead body. So we patrol or un-dig, get the soil off him, put the bin bag on a stretcher, patrol back, get him to the collection point, open this bin bag and throw up, because it’s just meat in there, and the meat’s been in there for about a week.

So the trauma is fucking impacting now.

We had absolutely fuck all. We didn’t even have any body bags, you know what I mean?
By then I had no morals, I just had nothing to give to anyone. I was probably just running on gas, to be honest. The tank was empty for me, mentally and physically.

I knew I had problems at the end of Kuwait. I reported (them) to my doctor and said, “I’ve got some strange emotions what I can’t understand.” I was crying all the time, but you know, when you cry, you cry for a reason. What I would now recognise as PTSD, we were showing all of the symptoms but not being told we had PTSD.

Next, I was stationed in Northern Ireland, but had a breakdown about four months into it…I just drank my way through it anyway. They sent me to the army psychiatric ward…you had to lie to fucking get out of there, you know…and (I) just carried on with my army career.

All 32 of us came down with PTSD, even from the officer all the way down. I saw blokes sat in boiling hot showers that would fucking burn the skin off you, stood there crying because of the job we were doing.

(If) I’ve got a problem, I solve it. It fucked me up. So fucking what? I have to get on with my life. I’m not going to cry into my pint. I knew what I was doing.