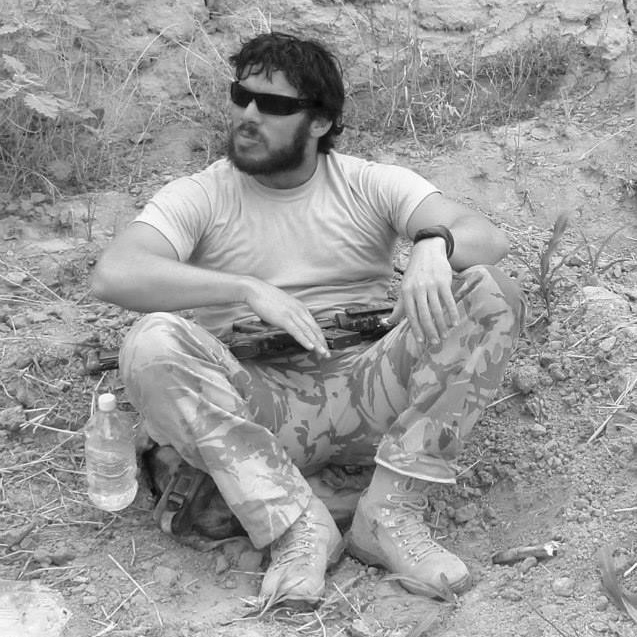 On the damaging effects of war

You know we live in a nice modern world at the moment, everything’s nice and courteous if you like. You know you have a cup of tea in the morning, you have a bit of toast, you go to work you do your job. War’s not like that – your day job is destroying the enemy. It can send people almost back to medieval times where life isn’t worth anything. And I suppose after a while of doing that people aren’t thinking straight and they’re not what they used to be. They can’t just go back and have a cup of tea in the morning. It takes a bit more than that. It takes a bit more control I suppose. And I wouldn’t say you’d be stupid, but you’d be brave to question it certainly, whilst you’re there.

I was Covert Intelligence Operator. Yeah, so my job was to go out (to) Afghanistan undercover and collect intelligence- that was the main task at that time.

(We were given) long hair, big beards, makeup and contact lenses. Yeah and obviously the traditional clothing, traditional cars etc. That was our job. Which was amazing. Really, really what we call sexy – sexy stuff to be honest. No Aston Martin involved but it was a good job. But you could seriously get in the shit. And if you do you’re very, very vulnerable because there’s not many of you. You’re just operating in very very small teams.

On daily life as a soldier

As a soldier you don’t really see the big picture. You haven’t got a clue what’s going on to be perfectly honest; you’re just getting told to do what you’re told to do. So I was constantly volunteering. I was like ‘Right, I’ll go out with the lads to find out atmospherics’ – atmospherics was the word of the day – to get me out on the ground so I could have a bit of a fight.

On being in the field

That is probably the first time ever, that I’ve ever thought “I don’t want to be here”; I am bricking it. You know, the lads that I was attached to were only young lads, they really were, there were nothing on them to be honest, just little scrawny lads. And you’re just watching them just getting wiped out pretty much and I saw one young lad – nineteen years old and he – just for a bit of a respite – leant on a compound wall and there’s an IED in the wall. You have to be the unluckiest person in the world to have done that, but he was just knackered. Red hot, you know forty degrees heat, been fighting all day he just wanted to a bit of a breather. And that bit of a breather was the thing that killed him. And then, you know that was the biggest thing to me, I was like this is fucking horrendous. This is, you know, if there is a hell I want to go there for some R and R because this is pretty bad.

…You kind of start to put yourself in what the enemy must feel like. Because it’s horrendous. You know, when you start off a day and everybody’s there, and then you finish that day and there’s four dead and sixteen people not there – you’re like what’s gone on here? You know you do have to question everything. You have to question your own actions.

When I first come back from my second tour I was that paranoid in the house, I used to set traps, I had cameras fitted… I (didn’t) know who was coming. And my wife was just like ‘what you doing?’ and all I wanted to do was just give myself an extra second’s notice to react because that’s what you always want. The ability to react and do something about the threat I suppose, but it ain’t healthy. I did sixteen years, I should’ve stayed on for twenty two years, but the military deemed that wasn’t gonna happen because of my mental health.

Ridiculous aggression…quite a bit of drink to be perfectly honest, a lot of depression, anxiety, paranoia, um, and just almost sleep deprivation, which exacerbates anything. You know, if you can’t sleep…every single thing is multiplied by I don’t know, one hundred. And the worst thing I suppose was, I was deemed a soldier with an attitude problem because I suppose that’s how it comes across. It was my wife that said ‘You need to go and see somebody about this because you’re a lunatic’. The wife will put it bluntly because she knows that’s what I need, to be perfectly honest.

I ignored her for quite a long time and it was one of my friends that I used to be covert ops with what said ‘Mate you need to go and see somebody’. And that’s kind of weird…I listened to my friend who I served with rather than my wife bizarrely because like what does she know? And that was it, that’s kind of, you know I went to speak to somebody and then (the) military was saying, ‘Cheers. Thanks for your time.’

I got diagnosed in 2014. it’s irreversible and it will always be there in some way, shape or form, which I suppose is correct. I don’t think it stops you doing your job to be perfectly honest; it wouldn’t stop me being a good soldier. It might stop me being a good husband and a good community member but it doesn’t stop you doing your job. You’re surplus to requirements now because you can’t do this, you can’t do that, we’re going to have to take weapons off you because we don’t know what you’re gonna do.

I had therapy – quite a bit of therapy – medication, still on medication now to this day. You know I was really embarrassed. I suppose it’s only really recently that I’ve actually started to tell people if they ask. I don’t advertise the fact…I used to say I just left the military, I’d had enough, I left. I’d never (say) I left because I have PTSD because I was embarrassed and there’s obviously a massive stigma, still, to this day. But you’ve got to get on with it, haven’t you, you know?

You can get people going a little bit wild, you can. But I suppose it’s the nature of the beast. You can’t expose people to that much and expect them to continue operating (to) a professional standard. And you’ll notice it. They’ll start getting scruffier, scruffier on a daily basis, hair is ridiculously long, they’re not shaving, their kit is just hanging off them, they’ve almost torn their shirt off so their arms are showing and they start becoming undisciplined. But it’s a dangerous thing you’ve got to nip it in the bud quite quickly.

There’s always going to be a part of you that wants to fight, I suppose a bit of a beast inside. It’s just learning how to control that.

Interviewed on 18 April 2018 at The Imperial War Museum by Matt Adams. Transcript completed by Abby Middleton.